You are here: Home / Archives for Front Desk 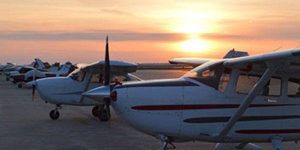 Bryan was born and raised in Normal, IL where he took an interest in aviation and began flying in 2014 at 17 years old.  He attended the University of Alabama, Roll Tide, and graduated in the spring of 2019 with a degree in Computer Science.  Realizing his heart was in aviation instead of computer science, he moved to New Orleans to earn his instrument, commercial, and CFI ratings with Gulf Coast Aviation while working as a programmer on the side.  In his free time, Bryan enjoys whitewater kayaking throughout the southeast, watching Chicago sports teams, and reading.  Now proudly a member of the Gulf Coast Aviation team, he looks forward to sharing his knowledge and passion of aviation with students.

Ryan was born and raised in New Orleans. He began studying aviation at Gulf Coast Aviation in 2018 with a goal to receive his Private Pilot Certificate while simultaneously studying Construction Management at LSU. Since then, he has received his Instrument Rating, Commercial Pilot Certificate, and his CFI Certificate. In September of 2020, Ryan began working part time at our Baton Rouge location while he finishes up his bachelor’s degree. Upon earning his bachelor’s degree, he has recently moved to our New Orleans location.

Patrick grew up outside of Augusta, Georgia. He attended Winthrop University in Rock Hill, SC, where he obtained Bachelors and Masters degrees in Music Education. After spending nine years in public education, Patrick enlisted in the Marine Corps as a musician. After seven years in the Marine Corps, he decided to pursue a lifelong dream of becoming an aviator. He enrolled with Gulf Coast Aviation in 2021, earning his private pilot’s license, instrument rating, commercial pilot’s license, and CFI rating while finishing up his last year of active duty in the Marine Corps. In his free time, Patrick enjoys spending time with his wife and their three children, running, and woodworking. 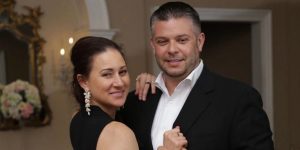 Bryan’s interest in aviation was sparked at a young age during his family’s annual trips to the Belle Chasse Naval Base’s New Orleans Air Show.  After graduating from LSU in ’02 with a business degree, Bryan’s career path focus was in the restaurant industry.  This was a natural career selection for Bryan since he already acquired six years of experience working in a restaurant near his family’s home since age fifteen.  Shortly after graduating from LSU, he joined a national restaurant group and had the opportunity to work and live in over twelve different cities across the United States, most notably, San Francisco (where he met his beautiful wife, Brooke), Napa and Washington, DC.  In 2009, Bryan, along with his wife Brooke, purchased his first business, Restaurant des Familles, which incidentally was the very first restaurant Bryan worked as a young teenager.  The Times-Picayune did a featured story on Bryan’s journey from busboy to owner that can be viewed here.

In 2019, Bryan and Brooke opened their second restaurant in the Warehouse District of New Orleans and named it NOLA Caye.

In July of 2021, Bryan began flight lessons with Gulf Coast Aviation to pursue yet another lifelong goal of obtaining his pilot’s certificate.  Not only did Bryan obtain his Private Pilot Certificate, but he also acquired his Instrument Rating, Commercial Pilot Certificate, Multi-Engine Certificate and CFI within a thirteen month period.  Bryan now enjoys helping others fulfil their aviation goals while instructing at Gulf Coast Aviation on a part-time basis. 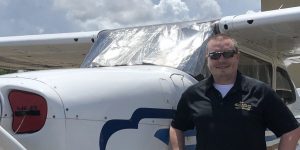 Howie hails from Niagara Falls, NY though he grew up mostly in Nashville, TN.  He made the trek to New Orleans to attend Naval ROTC at Tulane University and earn his commission in the Navy.  After graduating in 2006 with a degree in Computer Science, he moved to Pensacola, FL to begin flight training.  He earned his wings in 2008 and moved to San Diego, CA to fly the MH-60S.  On that tour, he deployed twice to Iraq and Kuwait to fly MEDEVAC during both Operation Iraqi Freedom and Operation New Dawn.  When his time in San Diego was complete, he moved to Lakehurst, NJ to become the Airport Manager of Maxfield Field (KNEL) in charge of all aspects of the airfield to include Line Operations, Air Traffic Control, and Ground Electronics while earning his Aviation Master of Business Administration degree from Embry Riddle.  Upon completion of his time in NJ, the Navy transferred him to Okinawa, Japan.  Over three years in Okinawa, Howie was responsible for military airspace throughout Asia and Australia.  After his rewarding time in Okinawa, Howie decided to give civilian life a try and moved back to New Orleans to become the Airport Manager and Assistant Airport Director here at the Lakefront Airport!  After a couple of years at the airport, the call of the cockpit became too strong.  Howie earned his CFI and began working for Gulf Coast Aviation in July 2019 then became the General Manager in March 2020.  In his free time, Howie and his wife Jacquelyne enjoy traveling the world.  When they aren’t traveling, they can be seen absorbing as much New Orleans culture as possible, to include as many Tulane sporting events as time allows! 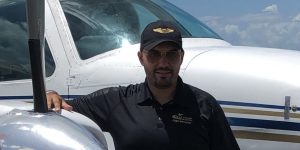 Mohamad was born and raised in the countryside of southern Lebanon. He started his aviation career in 2010 at the age of 17 and graduated in 2012 with a degree in aviation from the Royal Jordanian Air Academy in Amman, Jordan. Mohamad then went back to Beirut and worked as a Safety Officer at the Aeroclub of Lebanon. He moved to New Orleans in August 2015 where he received his CFI, CFII, and MEI certificates. He joined the Gulf Coast Aviation team in May 2019 where he takes pride in his students’ progress and plays a positive role in the aviation community of New Orleans.

Ashlyn was born and raised in South Ga and has always had a love for aviation. She has flown
along side her dad since five years old in his Citabria and throughout his career. She moved to
Louisiana for college but found she wanted to fly more. She attended Gulf Coast Aviation for her
Private, then moved back to Georgia, where her dad instructed her through her Instrument. After
her Instrument is where she attended American Flyers in Pompano Beach, FL for her
Commercial and their CFI-CFII program.
Ashlyn enjoys water skiing, snow skiing, hiking, CrossFit and reading, but “nothing compares to
flying and looking down at whatever the world has to offer.”

Born and raised in Baton Rouge, Louisiana, Ryan joined the US Air Force in 2010. He was stationed at Nellis AFB in Las Vegas, Nevada, and was a crew chief on the F-22A Raptor in the Test and Evaluation Squadron. In 2016, Ryan earned his private pilot certificate to accomplish a lifelong dream of his. It wasn’t until 2020 when he was working as a Probation and Parole Officer that Ryan wanted to fly professionally. He found Liberty University’s online aviation program coupled with Gulf Coast Aviation’s partnership and enrolled in the Bachelor of Science degree path. Ryan earned his instrument, commercial, and CFI ratings through Gulf Coast and his bachelor’s degree from Liberty University. Ryan is currently working towards his Masters of Science in Aviation Leadership at Liberty University and works at the Louisiana Department of Transportation and Development as an Aviation Safety and Compliance Officer.

Born in Savannah, Georgia, Wade and his family lived all throughout the country before finally
settling in Covington, Louisiana in 2000. In 2006, he joined the Marine Corps Reserves and
spent three of his eight years in the Reserves on active duty stationed in Belle Chasse,
Louisiana. Having a lifelong dream to learn how to fly, in late 2018 he discovered Liberty
University’s unique online aviation program and how they partner with the VA and local flight
schools around the country (i.e. Gulf Coast) to complete a student’s actual flight training. After
he gained his private pilot’s license in May 2019, he then went on to obtain his instrument,
commercial, and CFI ratings with Gulf Coast through Liberty’s program. An avid golfer, Wade
enjoys spending his spare time catching a quick round on the links with his friends and family. 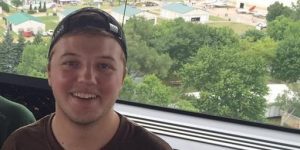 Nathaniel started flying at a young age and received his Private Pilot Certificate with Gulf Coast Aviation. He completed his flight instructor ratings (CFI and CFII) at the beginning of 2017 and started working at our New Orleans location. He is currently working on his engineering degree at LSU. Going back to school for the 2017 Fall Semester, he helped us open our new Baton Rouge location in September. He also flies for Southern Seaplane for their 135 operation.
**Nathaniel was not involved in the making of this biography. Please contact him for details.